Exactly one year ago today, the Supreme Court of the United States handed down its decision in South Dakota v. Wayfair, effectively ending decades of special treatment for online-only retailers and clearing the way for states to require all retailers to collect sales tax. Thanks to a careful and deliberate strategy to get the case heard by the Court, the decision was a huge win for the retail industry after more than two decades fighting to level the playing field for all retailers.

“Today’s ruling will give every retailer the opportunity to compete on a level playing field without government's thumb on the scale—that’s a win for all those who believe in free markets. States had this authority taken from them decades ago. Most will work quickly and judiciously to reclaim their authority and create a level playing field for all retailers selling to customers in their states.”

Immediately following the decision, RILA and policymakers began working with state legislators to advance a model for economic nexus and marketplace collection that could be used across the country. A year later, the results are as predicted.

40 states and the District of Columbia require the collection and remittance of sales tax on purchases made online. Of those 41 – 32 also require it on purchases made through a third-party marketplace. States are seeing higher than expected revenue and retailers are now able to compete on a level playing field; all without raising taxes.

“As predicted, after decades of fighting for sales tax fairness, states worked quickly and judiciously to create sales tax parity once given the authority,” said Brian Rose, RILA director of state affairs & advocacy. “It’s been an exciting 12 months watching states take action across the country, only a handful more need to take action to have a truly level playing field nationwide.” 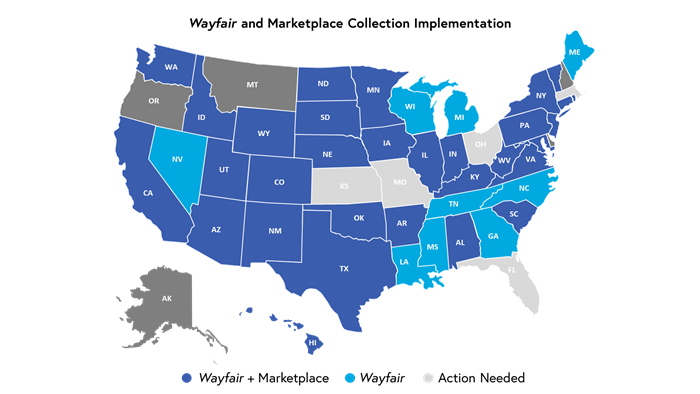